Dear Kevin Johnson and in fact, all business leaders of the world,

Can we take a minute to learn from the recent events leading up to tonight’s 2018 NFL draft?

Can we take a minute to highlight the recently revealed tweets from Josh Allen’s Twitter account in 2013 including “if it ain’t white, it ain’t right?”

Can we take a minute to highlight that up to 32 NFL teams, “could only find positive things about Josh Allen’s background”, yet Yahoo could uncovered these findings hours before the draft?

Can we take a minute to highlight that NFL team executives have already informed Adam Schefter that if anyone was to search hard enough for any incriminating evidence on any of these NFL draftees they would find something? (Suggesting that somehow having more controversial information is a perfectly acceptable excuse for this referenced behavior.)

Can we take a minute to recognize we are now making comparisons today between Baker Mayfield and Brett Favre, when just a little over a year ago Baker Mayfield was arrested on charges of public intoxication, disorderly conduct, fleeing and resisting arrest?

Now, before this conversation slips away to a total blame-game, can we highlight that in the 2,543,280 minutes since Josh Allen’s aforementioned tweet, we can find parallels between this incident and the recent events involving Starbucks? Can we also though take a minute to learn a thing from the events leading up to tonight’s NFL draft?

While it is impossible to say as of writing this article if these 2013 high school tweet’s will hurt Allen’s draft position, let’s hypothetical say it does. Let’s hypothetically say he drops a few positions in this evening’s draft. The hypothetical impact of that single tweet from 2013 would result in this individual losing millions of dollars on his total contract. Does this sound familiar to Starbucks? While it is great you are taking the opportunity to train your employees this May 2018, calculations have your organization also losing millions of dollars in lost revenue because of recent events. But, what if Josh Allen and Starbucks had the proper training BEFORE these issues arose? What if both had the training tools to be more self-aware of how mindsets and cognitive biases impact human behavior? Now we could all speculate on the total amount of money saved, the improvement it would have on public perception, and the overwhelming benefit it would have on the future. But, for you and for everyone else, what more findings do you need to take that first step on your journey towards self-awareness?

Listen, I get it, we’ve all heard it before and probably even felt it: “Ignorance is bliss!” In fact, I could see why many of us think it is better to hide and avoid the truth than it is to face the facts. Unfortunately, so many times we believe if we put our head in the sand the problem will blow over, yet those unconscious biases end up in the end, showing their ugly head.

So, where do we start? Well, a few weeks ago we measured within our own network the level of self-awareness businesses have on a variety of topics. The results reflect the views of a significant number of individuals across a wide variety of ages, job positions, and industries. These findings to me are extremely interesting and I strongly recommend taking an hour out of your day to watch/listen to our webinar HERE. In this article, I want to focus specifically on the results (see images below) we collected related to distress and emotionality on workplace behavior. To provide some background reference, we have known for years the impact of stress on higher cognitive functioning (review in Arnsten, 2009). Yet, when we asked people to freely respond to the following questions, “When I am stressed, I have a hard time solving workplace problems” and “I feel my emotions cloud my judgment at work” we found an overwhelming percentage of people respond that they believe neither stress nor emotions have an impact on their decision making abilities or we found people fully disagreed these mindsets have an impact on their workplace abilities. So, if we extrapolate these results to the general workplace population, we can conclude that a majority of people do not believe these emotional states have any impact on their behavior. Now, let’s disregard that we know these results contradict what we know from the research world on stress and executive functioning and get right to the big challenge within these findings: how do you convince someone of the need for training when it appears most individuals are not even aware of the effect these mindsets have on workplace behavior? Again, I give respect to Starbucks for taking the initiative to offer company-wide training but would this directive have even been generated if the unfortunate incidences hadn’t caught the public’s attention a few weeks ago? In the wake of Josh Allen’s attention moments before the Draft begins, will aspiring professional athletes in high school start to monitor more closely their Twitter activity? Will other businesses see this as the opportunity to take the first step towards self-awareness and improvement? 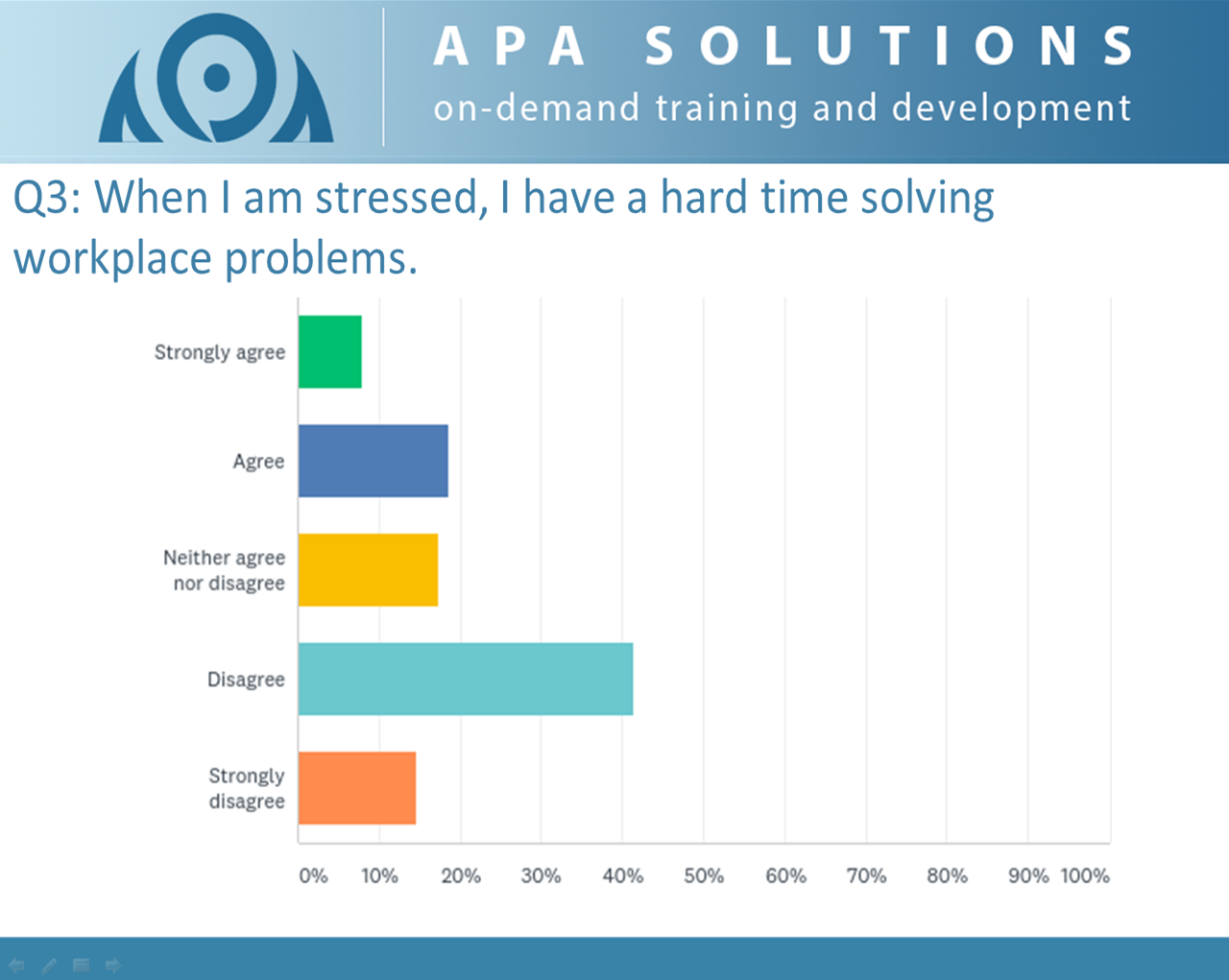 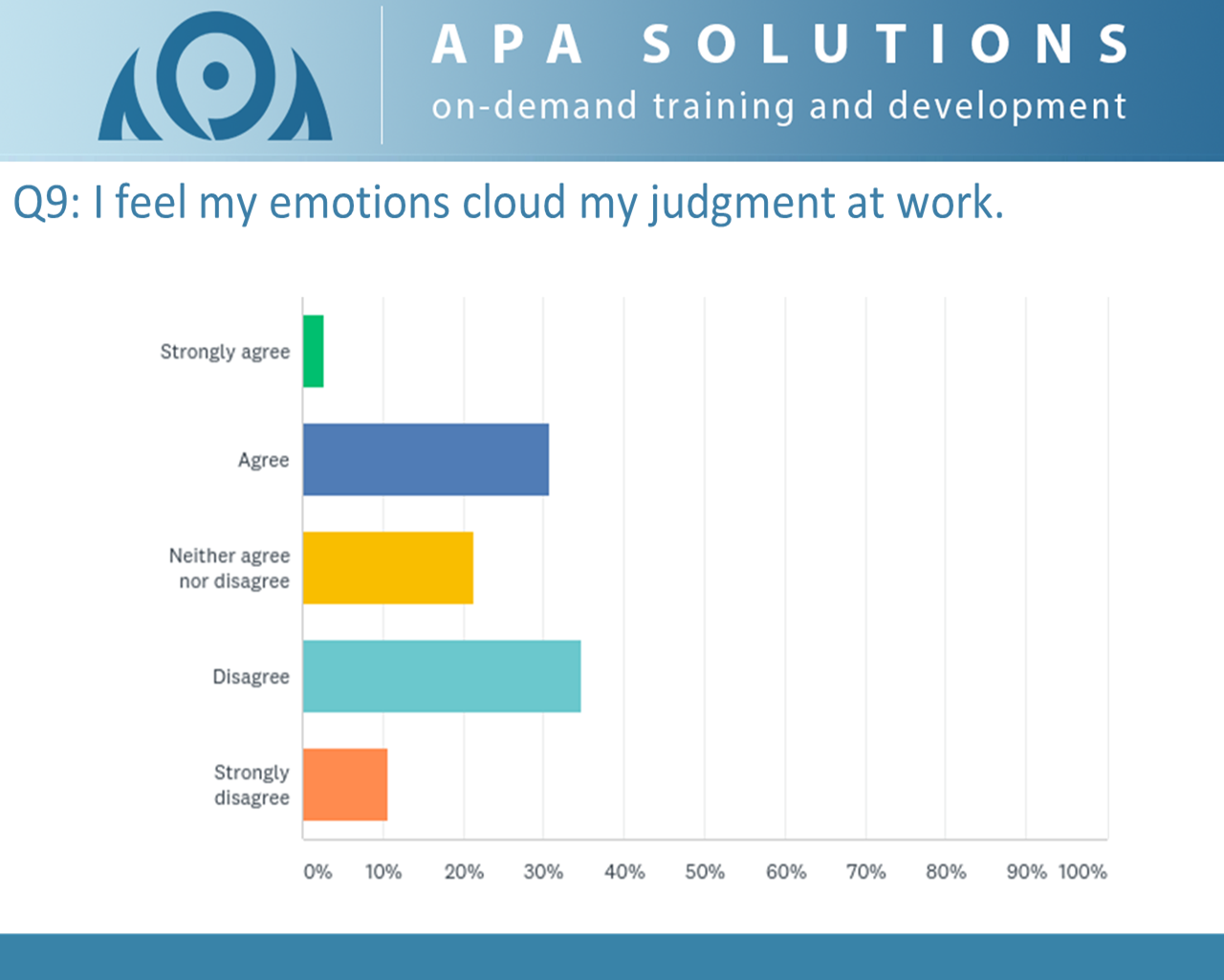 Honestly, I don’t know the answer to those questions but maybe these results are the shock we need for change to begin. Every time we have presented these findings, I have been pleased with the extremely productive conversations we have had with all of our attendees. For me, I believe that high level of engagement is where the greatest impact lies. Within these conversations, it gets us to think about change and develop ways to improve ourselves. These discussions can be the catalyst to restructure the way we think and how we behave. So many times the greatest challenge lies in taking the measures to become more self-aware but without taking that first step, why would anything change? Without taking that first step, how could we expect a different result in the future without giving ourselves the proper tools to avoid these errors in the future? Rest assure, though you do not have to go down this journey alone.

Are you surprised by these findings? What do you think accounts for these results? Where does a company leader go from here? How can we get you to take that first step in your journey?

Please leave your comments below and let’s start the conversation.

Erikson is a psychophysical researcher focusing on factors that influence how people perceive the world around them. As an individual highly engaged in neuromarketing and psychophysical techniques, he brings a great deal of knowledge to our brain-based approach. Through his years of research, Erikson has produced many peer-reviewed articles in notable journals, receiving numerous academic awards. His experience has led to a data-driven approach to decision making and an emphasis on using evidence to solve problems.